Understanding the evolution of molecular electronic structures is the key to explore and control photochemical reactions and photobiological processes. Subjected to strong laser fields, electronic holes are formed upon ionization and evolve in the attosecond timescale. It is crucial to probe the electronic dynamics in real time with attosecond-temporal and atomic-spatial precision. Here, we present molecular attosecond interferometry that enables the in situ manipulation of holes in carbon dioxide molecules via the interferometry of the phase-locked electrons (propagating in opposite directions) of a laser-triggered rotational wave packet. The joint measurement on high-harmonic and terahertz spectroscopy (HATS) provides a unique tool for understanding electron dynamics from picoseconds to attoseconds. The optimum phases of two-color pulses for controlling the electron wave packet are precisely determined owing to the robust reference provided with the terahertz pulse generation. It is noteworthy that the contribution of HOMO-1 and HOMO-2 increases reflecting the deformation of the hole as the harmonic order increases. Our method can be applied to study hole dynamics of complex molecules and electron correlations during the strong-field process. The threefold control through molecular alignment, laser polarization, and the two-color pulse phase delay allows the precise manipulation of the transient hole paving the way for new advances in attochemistry. 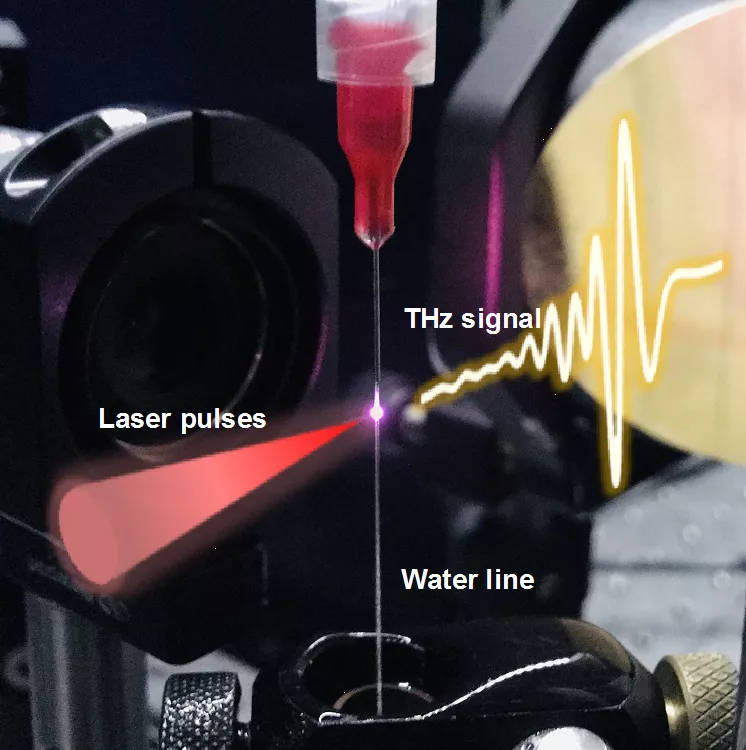 
Matters are generally classified within four states: solid, liquid, gas, and plasma. Three of the four states of matter (solid, gas, and plasma) have been used for THz wave generation with short laser pulse excitation for decades, including the recent vigorous development of THz photonics in gases (air plasma). However, the demonstration of THz generation from liquids was conspicuously absent. It is well known that water, the most common liquid, is a strong absorber in the far infrared range. Therefore, liquid water has historically been sworn off as a source for THz radiation. Recently, broadband THz wave generation from a flowing liquid target has been experimentally demonstrated through laser-induced microplasma. The liquid target as the THz source presents unique properties. Specifically, liquids have the comparable material density to that of solids, meaning that laser pulses over a certain area will interact with three orders more molecules than an equivalent cross-section of gases. In contrast with solid targets, the fluidity of liquid allows every laser pulse to interact with a fresh area on the target, meaning that material damage or degradation is not an issue with the high-repetition rate intense laser pulses. These make liquids very promising candidates for the investigation of high-energy-density plasma, as well as the possibility of being the next generation of THz sources.


We are living in a dynamic world, where all matter is in a vibrant process, whether it is a giant celestial body or a small atom. Being able to observe, analyze, and manipulate these dynamic processes is undoubtedly essential for scientific discoveries and technical innovations. The evolution of any physical quantity (e.g., displacement, mass, electromagnetic fields, intensity, phase, and spectra) with time gives rise to different time-varying phenomena—some are slow, some are fast, and some are ultrafast, in view of what human beings can sense. With the modern smartphone or camera, fast motions within the microsecond time scale can now be recorded in daily life. However, when we enter into the micro/nanoscale world, what happens often becomes ultrafast. For example, atomic diffusion occurs in a nanosecond (10–9s) time scale. Molecular rotation, charge transfer relaxation, and magnetization reversal happen in picoseconds (10–12s). Molecule and lattice vibrations can happen even faster, occurring in femtoseconds (10–15s). Looking into the depths of an atomic system, electrons move orders faster to the attosecond (10–18s), which is currently the fastest process that human beings can observe. Furthermore, when we explore the nucleus of an atom, we will find the ultrafast dynamics happening in zeptoseconds (10–21s). These ultrafast processes, which eventually govern the property of matter, need special pulsed probing sources, methods, and instruments to investigate. The related ultrafast technologies play important roles for research and applications in fundamental physics, chemistry, materials, biology, energy, and information science. Ultrafast science is a general term referring to a knowledge system to investigate and explore the phenomena and laws of ultrafast changes in the universe. It involves various disciplines including atom and molecule physics, condensed matter physics, mechanics, optics, chemistry, biology, material science, and information science. Thus, ultrafast science has developed rapidly in the past decades. The Nobel Prize in chemistry was awarded for femtosecond laser chemistry in 1999. The Nobel Prize in physics was awarded for optical frequency comb laser precision spectroscopy in 2005. The 2018 Nobel Prize in physics was awarded for ultrashort super-intense laser pulse technology—chirped pulse amplification. In the last 10 years, over 50,000 research articles have been published in over 1,000 journals, as analyzed by Web of Science using the keyword of “ultrafast.” However, there lacks a specific high-impact journal that focuses on ultrafast science. This is the motivation for launching the Ultrafast Science journal. After over 1 year of preparation and discussion with the American Association for the Advancement of Science (AAAS), we reached a consensus that ultrafast science is an emerging and important direction which covers very broad and leading research fields. In 2020, Ultrafast Science became a Science Partner Journal distributed by the AAAS in collaboration with Xi’an Institute of Optics and Precision Mechanics (XIOPM), which is one of the leading organizations in ultrafast science in China, from the Chinese Academy of Sciences (CAS). Ultrafast Science is an Open Access Journal which publishes top-quality original research articles, comprehensive reviews, and perspectives, reflecting significant advances, breakthroughs, and novel applications with considerable potential in ultrafast science and broad interest from scientific communities. Topics include but are not limited to ultrafast physics, ultrafast laser and application, ultrafast imaging, ultrafast spectroscopy, ultrafast measurement, ultrafast materials and devices, ultrafast terahertz photonics, ultrafast electronics, ultrafast chemical physics, and other ultrafast phenomena. Interdisciplinary research demonstrating how ultrafast technology advances physics, chemistry, biology, material science, and other disciplines is especially welcome. We are honored to serve as the founding Editors-in-Chief and are grateful to work with the members of the Editorial Board, which currently comprise around 40 famous scientists from all over the world, including Gérard Mourou, who was awarded the Nobel Prize in physics in 2018. We believe that Ultrafast Science will become a high-impact journal in the near future with all of your participation and contributions, and that the journal will grow with the continuous breakthroughs in the ultrafast frontier.